The highs and Lows of Tandem nursing

I do have a photo of me tandem nursing just prior to discharge from the hospital with my second, but after the reaction I got from my now sister-in-law when she accidentally stumbled across it on my camera makes me think I shouldn't publish it (I am pretty naked). On looking at it again, it could be worse, I am wearing pants (in the american sense of the word), and a ridiculous turban on my head after taking a shower.  Tell you what, I'll post it at the bottom of the article and you can decide whether you want to see it.

I became pregnant with my second (Ellie) in the Summer of 2010 when William was 2 1/2 yrs old.  The first few months of the pregnancy were a little rough because my nipples were very sensitive.  I understand that this is pretty common, and many women stop nursing at this point.  William was a big boobie monster and was still nursing through the night.  We managed to carry on nursing throughout the pregnancy using a couple of techniques.

1.  I shortened feedings by telling William "one more minute" and then counting down from ten.  William was pretty accepting of this, occasionally he would refuse to budge, but it was more of a game for him and he understood when I asked him to be more gentle.

2.  William very kindly decided to start sleeping through the night which was great and allowed me to get some decent sleep.

I think overall I enjoyed the time that we all spent together nursing.  I tandem nursed for seven months, and the last time that William nursed was very emotional for me, especially as he is such a Daddy's boy now and doesn't seem to need me as much (I know he does really).  I would never change anything, and he has never asked for boobie since, so I know that it was a pretty mutual decision that we were both ready for.

Please share your tandem nursing experiences, I'm sure tandem nursing is more common than we think, it's just not done in public and maybe not talked about as much as it should be.

Here is the photo - 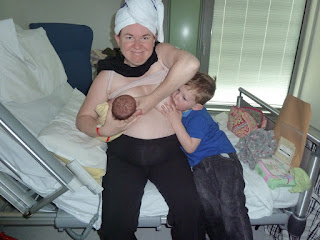 If you have enjoyed reading this article and you haven't fainted after looking at that picture, then you may enjoy reading similar articles about breastfeeding by the following bloggers.
Baby Beads is a company that sells beautiful necklaces that keep babies hands busy while nursing.  My Ellie is a pincher and pinches constantly while nursing and you know how sharp those little baby nails are!!

The Secret Life of Kate

Thank you for reading.  Please complete the following Rafflecopter to enter the competition for the Keep Britain Breastfeeding Grand Prize.