Father Gets Help From 7 Women to Breastfeed His Son

Please read this post written by Mike, one of the directors of Snugglebundl.  He believed in the benefits of breastfeeding so much that this is what he accomplished in his family's time of need.

Read to the end for a great Snugglebundl offer.

Having been a teacher for many years, I never thought I would end up as a director of a baby product company but when a friend introduced an amazing new idea to me I couldn't help but invest time and money into a starting up snugglebundl.co.uk. Amongst lots of other great feedback from mums about the snugglebundl lift and lay baby blanket, is that they find it ideal for discreet breastfeeding. Natural feeding is something I really feel strongly about to the extent that when the mother of my children was injured I rallied up support from many women to feed him until she recovered sufficiently to take over again.

We were driving home in the early hours on an unlit dual carriageway. As our six month old baby had been crying for some time we were contemplating taking him out and nurse him. After some deliberation we concluded that with just 2 minutes to go before we arrived and the roads were so clear that we would be OK to give him a calming feed. The moment she lifted him out, a speeding car appeared from nowhere in my rear mirror— travelling at a frightening speed thinking, like us, he was alone on the road. There was no time to do anything. By the time I shouted to get down the impact occurred and our car swerved to the left, bounced off a tree and roll rolled over a several times settling on its side. I looked around but couldn't see Reu or his mum and my daughter, Thea aged three, was just waking up. Realising that they must have been thrown and my heart sank. My door was against the road so I tried desperately to undo my seat belt to climb out the sun roof but it wouldn't unbuckle. I was lucky it didn't because I would have been half way out when another car hit the underside of my vehicle rolling it over on to its wheels. I would have undoubtedly been crushed to death.

Worried that we would be hit again and wanting to find my baby I quickly got Thea out and took her away from the car. I could see her mother on the road so we rushed over to see her. She was in a comatose state and unable to be moved. At that point a lady came over who saw the bodies on the road and told me she had picked up my son just before a lorry drove past! Upon inspection he seemed ok but grizzly. His mum had taken the brunt of the fall. She was barely conscious, had several broken bones and severely concussed. The ambulance crew arrived and we took Reuben and her to the nearest hospital.

The hospital was a natural environment to me as I had been a combat medic in the Army so I stayed in A&E discussing the treat-ments. Strangely they thought I was a doctor and treated me like one of the team! This was to my advantage as I could stay with my baby, who was fully aware, and offer him comfort through it all.

Worryingly an x-ray revealed that my son had a brain haemorrhage and had to be taken to a London hospital. Before I left to follow the ambulance in a friends car his mum had stabilised and we were able to have a short conversation about the situation before she drifted off again. I knew his mum would want him to continue breastfeeding and we both realised it would be contaminated with drugs used to help her recuperation. Luckily we were part of a national network of breastfeeding mums so I managed to put out the message that we needed some mums in the London area to feed him. In no time about seven mums were on rota kindly feeding Reuben in shifts! They would bring their own baby and hand them to dad whilst they fed my son. It was so generous and caring that even now it draws me to tears when I think about it. I never really got to know them because they would flash in and out like guardian angles to take care of my sons needs. They were strangers helping out a stranger in need but we all had one thing in common and that was a belief that breast is best– even if it is another mothers milk. This help continued for two weeks and there were more mums willing to volunteer if needed! .

Once we got him out of hospital three mums Natalie, Lucy and Jo came to stay at our house at different times and nursed him until his mum was able to come home. By this time Reuben’s mum had been off drugs for a few days but, just in case, Natalie stayed a little longer until my son was able to restart suckling from his own mothers breast. Even now, almost 14 yeas later, nothing gives me more pleasure than seeing a baby being fed naturally.

In my new business I am in contact with lots of mums and breastfeeding organisations who we fully support. The snugglebundl is proving very popular and we sold on every seven minutes. This is mainly because it is the only product which allows a parent to move babies without waking them and not have to carry a car seats! It wasn't originally designed as breastfeeding aid but I am so pleased it as turned out to be really practical for this purpose. Everyday we get feedback from mums telling us of it’s benefits and are pleased that it is having the impact it is. God bless all you parents who promote the benefits of breastfeeding. 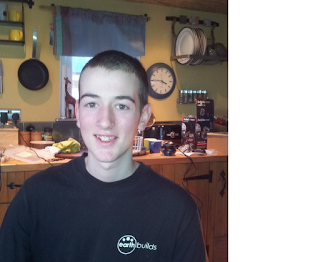 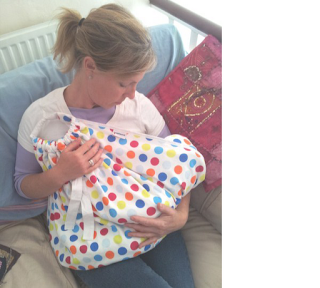 Snugglebundl being used for discreet breastfeeding

SnuggleBundl are offering you the chance to own a Snugglebundl blanket of your very own with an incredible saving of 15%.  Please use the code SNUG15 at checkout to receive this special offer.

The snugglebundl has been designed with handles so that you do not need to disturb your baby when moving him or her between locations when they have fallen asleep.

If you have enjoyed reading this article and would like to learn more about breastfeeding and join the Keep Britain Breastfeeding Scavenger Hunt to win more prizes and find more great coupon codes for breastfeeding goodies then why not take a look at the following blogs that are participating throughout June.

Diary of the Milkshake Mummy

Congratulations!! you have found the Keep Britain Breastfeeding Scavenger Hunt Logo and you can now enter to win the Grand Prize.  Remember, the more posts you read the greater your chances of winning.  Please enter to win by using the rafflecopter below.