New Playground in Kemsing - What took so long? updated 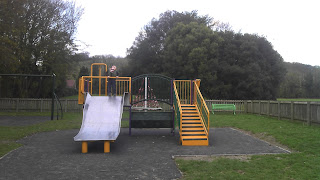 If you've visited Kemsing recreation grounds in the last 20+ years you'll recognise the fence and gate, everything else has been replaced with brand new equipment.  Since moving back to Kemsing 10 months ago, I have managed to avoid the playground as much as possible by going to better playgrounds.  To be honest, anywhere was better than Kemsing.  I think the last equipment was installed when I was a kid, and even back then I was bored with the equipment.  The swings were getting old, and a little broken. the climbing frame was a little bent from bigger kids hanging on it for the last twenty years, and the bouncy elephant was on his last legs.

Here are some photos of the equipment: 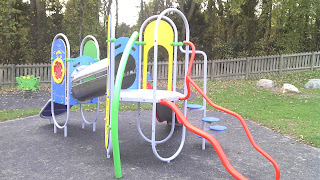 This is the smaller kids climbing frame/slide/tunnel.  Behind you can see a bouncy frog. 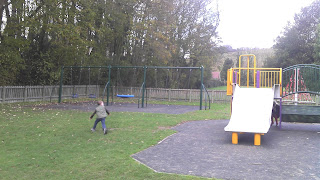 The swing set is pretty impressive, two big kids swing, 2 small kids swings and one of those circular swings, so everyone is covered. 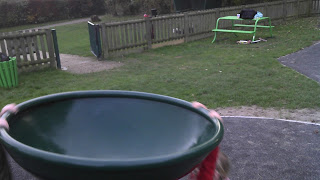 This egg cup shaped ride is really popular.  These are Williams and Isla's hands hanging on as they spin around.  They weren't allowed on it today because someone had broken a bottle in it.  We did manage to get a dust pan and brush from the local nursery Bumble Bees and clean it out.  We called the Parish Council first, but they are closed anytime after 1pm. 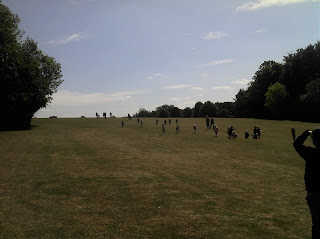 The greatest thing about Kemsing Playground - The open space
My family returned to England for a couple of reasons, one being that we're now the proud parents of two children and wanted to be close to grandparents.  I didn't have kids back when I grew up in Sevenoaks, so I had absolutely no ideas about bringing up children here.  Now I'm getting around to knowing all the child friendly places to visit and where the best playgrounds are.  In actual fact, the best playgrounds are not in Sevenoaks, the best ones are everywhere but Sevenoaks.  I was very disappointed to visit the Swanley playground this Easter and Summer.  Don't get me wrong, it's beautiful.  Everything you could ever want in a playground all in one place, and it's run by Sevenoaks County Council.  Why does Sevenoaks not have an amazing playground like that with boating, a train, a paddling pool, sand pit..........  Then there is Tonbridge, another amazing playground with a million things to play on and a sandpit which William loves.

My husband favours Otford, and I like Wrotham.  Greatness is nice but has no shade, and Pontoise has the death-defying sand cliff.

But now Kemsing can finally compete.  The new equipment has actually had some thought gone into it.  There is equipment for all ages.  A climbing frame and slide for smaller kids, and one for larger kids.  Swings to suit all ages, and one of those egg cup round about things that Ellie just loves to lay in and get spun around in.

Anyone interested in going to play at Kemsing playground can give me a call.  All my info is on my website - BoobieMilk
Posted by BoobieMilk at 09:12