The playground on Kemsing recreation ground and Nightingale Road were recently updated, which is great because they had not been touched in probably 15 years at least.  I remember playing there when I was a kid.  So, I got my kids together along with the neighbours daughter to go and check out Nightingale Road.  You may not know about it, it's pretty hidden behind Castle Drive away from the Village proper.  While we were there a lot of children made use of the new equipment which is really nice to see.  I even met a Mum with her two boys who had travelled from Sevenoaks because she liked it so much and it isn't as busy as HollyBush. 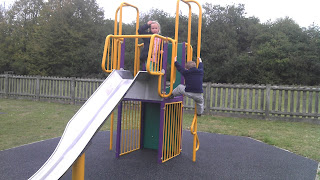 William & Isla on the slide
There are two main areas to the playground which is located in the middle of a large playing field with good off street parking past the local allotments.  There is a fenced off area with a gate which caters to smaller children, and behind this area there is a large area with equipment tailored towards larger kids.

In the fenced off area there are 2 swings for older kids and 2 for toddlers.  There is also a slide (pictured above), a roundabout (below), seesaw and bouncy/spring four seater thing that my Mum nearly broke when she sat on it.  The seesaw does not move a great deal with small kids on it, so a bit of muscle from Mum or Dad is needed. 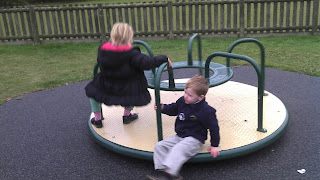 William & Isla on the roundabout
The Roundabout is Williams favourite playground toy, so he was happy.  They didn't put one at the Kemsing recreation field location.  For whatever reason, he loves to just sit on them and drag his feet on the ground.  I'm sure that this as why they all got removed from playgrounds when I was a kid.  Hopefully they have fixed the problem with kids getting their feet stuck underneath, it's not good for shoes either (luckily I got them from an NCT nearly new sale for £2). 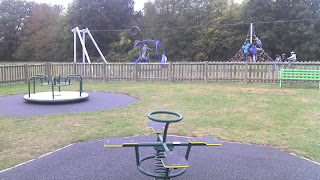 There is the four seater springy thing
So imagine William sitting in the middle of the ring pictured above with Isla sitting on the far side.  Now imagine a granny, not too tall, and a little over weight (aren't we all?) sitting on the seat closest to the camera.  I don't know how the kids didn't launch into outerspace, but my Mum did land on the ground, and the spring is not looking as it did before we got there.  This one is NOT for adults! 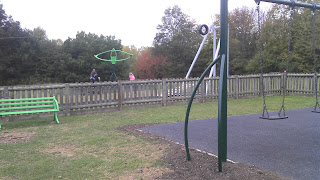 View of the toys for bigger kids (and adults) 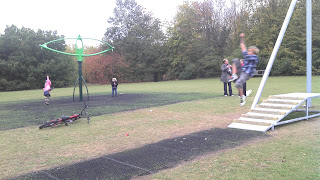 A closer view of the zip line and death trap
The kids soon got bored with the little kids playground, seeing kids playing out in the playing fiedl they wanted to join in the fun.  In the larger field there is a zip line which nearly killed an unsuspecting Mother just after we arrived when she decided to go on it while being pushed by 5 teenagers.  I really thought she was going to fly, and when she dismounted I grinned at her, but she was really angry (probably embarrassed too).

The death trap refers to the green structure in the background.  It has two chains hanging from it with a disc to sit on.  The two swings then spin around like a twirly washing line.  When we arrived at the playground there were a couple of older kids on this equipment with their Dad pushing them.  He got them up to such a speed that the two swings were horizontal to the ground.  Oh, if only I hadn't been wearing a baby in a sling, I would have been right on that?!?

The last two pieces of equipment can be seen in the background of the third photo, a climbing frame of rope and a swing that you lay in also made of rope.  The kids had the most fun climbing the rope climbing frame.  The first time William climbed it he got stuck and an older boy helped him down (Thank You), he got straight back on and by the third time managed to get down from the top all by himself.

We had a great time at the playground, made some new friends and thoroughly enjoyed ourselves.  I am a little upset that we didn't get a zip line at the other Kemsing playground, but I can live with it.  The only negative was the trash.  There was a lot of trash outside the fenced in playground, but this may have been due t the fact that no trash can had been provided in that area.  Of course that is never a good reason for littering, but another trash can would be nice Sevenoaks County Council.

Find out more about me, my family and my nursing bra fitting business on my website.