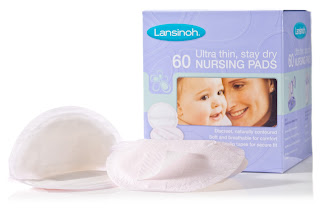 Lansinoh Breast Pads - available in 24 or 60 count boxes
Everyone who has had a baby and breastfed has heard of Lansinoh Nipple Cream, the one in the purple tube.  Since starting work in the public health field and working with breastfeeding mothers, I have had access to Lansinoh nipple cream and given it out to get mothers through those first few weeks of nipple tenderness.  After attending a few breastfeeding conferences I also had access to many nursing pad samples.  In 2007 I attended the ILCA conference in San Diego, CA while pregnant and was given an assortment of pillows, pumping attachments, nipple creams and breast pads.  I've had success with Lansinoh, Ameda and Medela disposable nursing pads, not so much with Simplisse.  Since 2007, all four of these companies have had changes of ownership or run into trouble with how they measure up to the "Code of Marketing of Breastmilk Substitutes", so I have tried a number of different breast pads to find something that is both code compliant and great.  Hygeia fits that bill but is not available in the UK.  I have tried both Sainsbury's and Tesco's generic breast pads with little success.  They are smaller, thicker and less absorbant.  At the beginning of Ellie's life when I was leaking the most, they ended up a soggy mess by the morning, with a big wet patch on my pj's or bed sheet URGH!
I also received a number of different nipple creams at the conference and tried them all.  I found that the easier they were to spread, the more useful they were.  Medela has the TenderCare nipple cream which is a lot easier to spread and acts more like a lotion than the sticky original Medela nipple cream or Lansinoh nipple cream.  The Simplisse nipple cream comes in a pump and looks like a white moisturiser and spreads really nicely too.  Again, this comes back to availability and CODE compliance.  I have found it hard to find anything other than Lansinoh nipple cream in the UK, and anything other than the large sized tube which is super hard to squeeze and is really big, enough for three or four Mums to share if I'm honest.
So, what are the choices?  Nature Babycare has come out with a biodegradable disposable breast pad which I am interested in stocking but can be found online.  Natracare also have a biodegradable product available which I hope to try very soon, and I'll let you know how it goes.  Ofcourse, you must be thinking why am I not using washable breast pads, and you should be.  I have always meant to try them, but right now I can only just keep up with my cloth diapers (and my mother spends too much energy complaining about how Ellie looks so uncomfortable in them and uses the Nature Babycare instead), one thing at a time I guess.
If you want to find out more about the CODE and how it relates to breastfeeding products, you can google it, search on Baby Milk Action, WABA, or some of the bloggers do a great job such as Blacktating.
Comments on pads that you have used and nipple creams that worked for you would be really great.
Posted by BoobieMilk at 04:17